The following excerpt is from my first novel Restorations, published by Oak Tara in October 2010.  I hope you enjoy it.

If you would like to read a longer sample, please email me at susan@susaneball.com.   Restorations is available on Amazon and Christian Book Distributors. 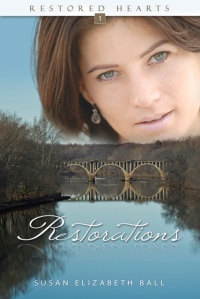 From her lounge chair strategically placed under the shade of a large oak tree, Karen looked up from the book she was reading and took stock of her family. Her husband, Jeff, frolicked in the lake with their youngest son, Kyle. Their middle son, Austin, had tired of the water and was playing Frisbee with a redheaded boy he had befriended. Trevor, the oldest, was trying to make small talk with a blonde in a tiny pink bikini. At twelve years of age, he had recently discovered girls and was wasting no time in getting to know the opposite sex better.

As Karen surveyed the scene, she felt a deep sense of contentment. It really doesn’t get much better than this, she thought. A lovely spring day at the lake surrounded by those she loved best. Karen picked up the romance novel and continued her reading.

After a while, Jeff brought Kyle to Karen and said he was going to swim to the small island in the middle of the lake. Jeff was an excellent swimmer, and the short swim out to the island and back posed no serious challenge. Karen occupied herself with toweling Kyle off and changing him into shorts and a T-shirt. She began gathering up the wet towels and sunscreen. It was almost time to head for home. When she cast her gaze back to the lake, Jeff was about thirty feet from shore and struggling to keep his head above the water.

“Jeff! Hang on, Jeff! I’m coming.” Karen’s heart pounded in her chest as she raced to the dock and grabbed the life ring. She tossed it in Jeff’s direction, but it fell short of his reach. She pulled on the rope until she could reach out and grab the ring and toss it again. Karen threw it over and over, as far as she could, but each time it landed a little short. Jeff was only able to get his fingertips on the ring once before it slipped from his grasp.

“Help us! Someone, please help us!” Karen yelled at the top of her lungs as she continued to throw out the life preserver.

A man and woman had been walking around the lake and heard Karen’s screams. The woman called 911; the man joined Karen on the dock, offering his assistance. By this time, Jeff’s head had disappeared in the murky water. The man dove in but didn’t find Jeff.

The man and woman stayed with Karen and the children, as the rescue divers searched for Jeff’s body. There was no hope now. Karen pulled her knees up to her chest and wrapped her arms around them. “You did everything you could,” the woman told her.

“It wasn’t enough. It wasn’t enough.” Karen Harper’s plaintive cries awakened her from her sleep. Her heart thundered in her chest. Her curly auburn hair was drenched with sweat. What’s happening?

Bolting upright, she opened her eyes and tried to focus. The room was dark. She reached out until her hand found the nightstand. She felt around for the lamp and turned it on.

“A dream. I was only dreaming.” Karen breathed deeply, trying to slow her racing heart. She closed her eyes again and shuddered. It seemed so very real. She could feel the warmth of the sun and the sand beneath her feet. She saw the panic on Jeff’s face as he realized he was going under and the scared faces of her children. Enough. Her heart was racing again. She shook herself and tried to clear her mind of the horrible dream.

If asked, Karen would say she never dreamed. She knew, of course, that everyone dreams, so certainly she must. But she could never recall having dreamed. Nightmares, however, were a different story. She could recall nightmares in vivid detail.

As she sat in her bed, trying to make sense of this nightmare, Karen recalled one from several years earlier. In that nightmare, Karen’s extended family had gathered for a reunion. The children were playing ball and running around, while the adults sat in lawn chairs eating hamburgers and catching up on each other’s lives. Suddenly, her father grabbed his chest and collapsed on the ground in front of her. She had crouched on the ground beside him and sobbed into his chest as he died.

Her sobs had awakened Jeff, who gently took her in his arms and stroked her head, whispering, “It was only a dream.” It had seemed so real that it took several minutes before Jeff could convince Karen that her father had not suffered a heart attack. “Your family has never even had a reunion,” Jeff had reminded her.

Even after all these years, she could visualize her father as he lay on

the ground gasping for breath. Despite the fact her father was still alive and well, Karen’s pulse quickened anytime she thought of that nightmare.

This morning Jeff was not there to comfort and console. This nightmare, while not based on reality, was accurate in its conclusion. Jeff was dead. He had been for nearly two years. Karen had tried to rescue him and had failed miserably. For the first several months after his death, she had been haunted day and night by the horrible series of events surrounding Jeff’s death. She had frequently awakened with a start, as she had this morning, frantic to save him.

Over and over, she had been plagued by questions for which she had no answers. “Could I have saved him if I’d tried harder? Is it my fault he’s dead?” “If I had been a better wife, would Jeff still be alive?” As time passed, she had to set aside her constant thoughts of him. There was nothing she could do for him now, except raise his sons to be the men he wanted them to be. As a single mother to three young boys, Karen had no time for guilt or self-pity. She had to provide for her family.