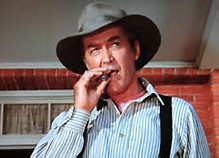 as my husband was channel surfing, he happened upon the end of the movie Shenandoah.  Jimmy Stewart’s character, Charlie Anderson, has just returned home from a futile search to find his youngest son who was captured by the Union Army.  On the way home, his oldest son is killed by a frightened young soldier. He arrives home bereft and learns that another son and daughter-in-law have been murdered in his absence.  Mr. Anderson has staunchly maintained throughout the war, that it doesn’t concern them.  Now, he has to face the reality that he can’t control many aspects of life–he can’t hide from the war and he can’t always protect his family from life.

As they sit down to breakfast the next morning, Mr. Anderson tries to say his normal ‘grace’ before they eat.  In the past, he has grudgingly thanked God for food which he doesn’t feel God provided:

Lord,
We cleared this land;
We plowed it, sowed it, and harvested it.
We cooked the harvest.
It wouldn’t be here—we wouldn’t be eating it—if we hadn’t done it all ourselves.
We worked dog-bone hard for every crumb and morsel
But we thank you just the same anyway, Lord, for this food we’re about to eat.
Amen.

This time, he chokes on the words, as he realizes for the first time that all of his blessings have indeed come from God.  Yes, he and his children have worked hard to grow their food and  provide for the family, but it was God who instilled them with the strength and ability to plow the land and plant seeds, to harvest their crops, and to cook meals.

God expects us to work hard and use the talents He has endued in each of us.  But, He also expects us to recognize that those talents come from Him.  As we read in Deuteronomy 8:17 – 18, “You may say to yourself, “My power and the strength of my hands have produced this wealth for me.” But remember the Lord your God, for it is He who gives you the ability to produce wealth.”

These verses follow a passage in which Moses warns the Israelites against the same type of pride and arrogance that Mr. Anderson displays.  He tells them to (1) remember how God brought them to this land (v. 2), revere God and obey Him (v. 6), and praise God when they have eaten and are satisfied (v. 10).  He reminds them of all the terrible tragedies that did not befall them as they wandered in the wilderness for 40 years. And, he concludes by reminding them that God has given them the abilities to grow food, build homes, and live comfortable lives.

As we celebrate Thanksgiving today, we all have much for which to give thanks.  As you thank God for your family, health, home, and other materials blessings, also take a moment to reflect on the abilities God has given you to allow you to produce wealth and to be a blessing to others.