I’ve knitted dozens of Christmas stockings over the past 37 years since my grandmother turned the duty over to me.  Most of them have featured traditional Christmas figures, such as Santa Claus, snowmen, and gingerbread men, on a red or green background.  I’ve even made a few on blue backgrounds.  Until now, however, I have never knitted a lavender Christmas stocking.

The occasion for this non-traditional stocking is the impending birth of our first granddaughter.  Two years ago, I made a pair of stocking for our son Matt and his wife Kristin for their first Christmas as a married couple.  They both chose a puppy pattern and, rather than having identical stockings, ask me to adapt the colors to look like their two dogs, Jasper and Allie.  With the expected arrival of their first child, a daughter to be named Brooklyn Elise, they wanted me to knit another puppy stocking.  The puppy on Brooklyn’s stocking has dark gray ears and a tan face on a lavender background.

It is coming along nicely, except that Brooklyn is a rather long name to fit on one side of the stocking.  I didn’t consider that when I stitched the name on it.  As it currently is, “KLYN” would show when the stocking is hanging.  Fortunately, I didn’t knit the name into the stocking but embroidered it on in duplicate stitch, so I can easily removed the stitched and rework it with “BROOK” on the front and “LYN” on the back.  My alternative plan is to try to free -hand the name using a back stitch.  I’m going to let the partents-to-be make that decision.

Last Christmas, I knit a stocking for our first grandson, Daniel.  It was a wonderful delight to carry on the family tradition begun by my grandmother and make a stocking for the first member of our family’s next generation. Daniel is too young to understand the family tradition yet, but I believe he will also treasure his special Christmas stocking.  Brooklyn is due January 7th, so unless she makes an early entry into the world, she will not be here to celebrate Christmas with us this year.  We will hang her stocking, however, and thank God for this precious new life and the wonderful blessings He bestows on our family. 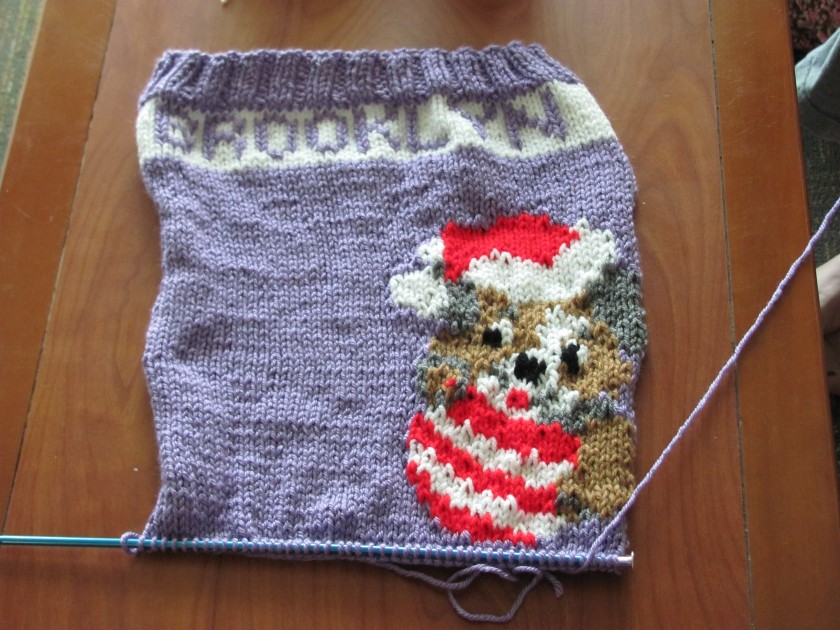