For days as we traveled around Alaska, we had watched for moose.  We had seen lots of evidence of moose in the area (moose droppings) but no moose.  That all ended as soon as we arrived in Denali.  As we drove into the park we were greeted by a moose at the entrance.  We stopped the car and headed a bit nearer for a better look, staying a safe distance away–we thought.  A ranger alerted us that we were in fact to close for comfort and warned us to stay at least 75 feet away.

We were greeted by this moose upon our arrival in Denali. 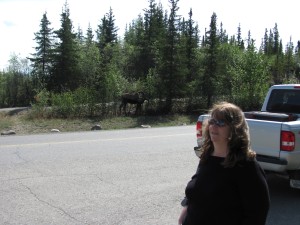 Susan and the first moose of our trip.

After a few minutes of munching on shrubs, the moose wandered off and we continued our trip into Denali.  We were expecting to see wildlife as we drove the 15-miles that tourists are allowed to travel into the park; however, nothing prepared us for the sight of a grizzly bear walking down the road toward us.  Steve stopped the car and took pictures as the bear meandered by the car.  He was nearly close enough that Steve could have reached out the window and petted him as he walked by.  We held our breath and prayed that he wouldn’t decide to attack the rental car.  Fortunately, he had no interest in us and kept going on his way.

Grizzly bear walking down the road toward us. 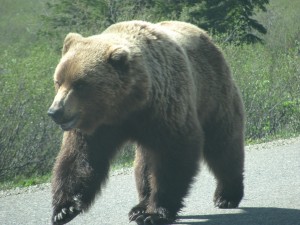 We had a close encounter with this grizzly bear.

We continued on our way but didn’t get far before we saw more cars stopped.  In the field were three caribou.

On our way out of the park we passed a couple more moose.  After seeing so much wildlife on our own, we weren’t certain that we really needed to get up at 4:30 in the morning for our 8-hour tour which started at 5 a.m.  But thankfully we did get up and go on the tour.  During our tour we saw several more bears and caribou as well as Dall sheep, Arctic hare, and a marmot.  It would have been perfect had our bus not broken down. We ended up sitting for nearly 2 hours until another bus could be dispatched to rescue us.  It was a long day, but all-in-all it was a wonderful day spent in a great nature preserve.

This Dall sheep seem to want to hitch a ride on our tour bus.

Another sighting of a grizzly bear.

Mt. McKinley, as viewed from Denali National Park 30 miles away.